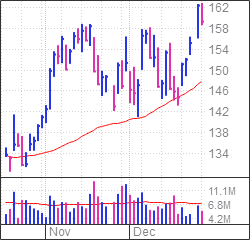 Applied Materials (AMAT) is the IBD Stock Of The Day as the major semiconductor equipment supplier is seen having solid prospects in the year ahead. AMAT stock was in a buy zone on Tuesday.


On Monday, AMAT stock broke out of a six-week flat base at a buy point of 159.10, according to IBD MarketSmith charts. The 5% buy zone extends to 167.06, based on IBD trading principles.

However, on Tuesday, AMAT stock fell back to the buy point of its breakout. Applied Materials shares ended the regular session down 1.9% to 159.64. Earlier in the session, it reached an all-time high 162.99.

Earlier this month, Cowen analyst Krish Sankar named AMAT stock as a “top pick for 2022.” He rates Applied Materials stock as outperform with a price target of 190.

“The setup looks bright for AMAT” because of continued growth in spending on wafer fabrication equipment, Sankar said in a note to clients. Applied Materials is well positioned as chipmakers invest in semiconductor capital equipment to support new factories amid widespread chip shortages, he said.

Applied Materials stock has an IBD Relative Strength Rating of 93 out of 99. That puts it in the top 7% of stocks for performance over the past 12 months.

What iPhone Troubles? Apple May Look To Augmented Reality In 2022

See Stocks On The List Of Leaders Near A Buy Point